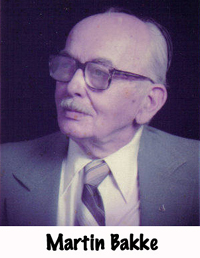 Back in 1979 Senior Friends was organized through the efforts of the Director, Mary Stephens, Martin Bakke, the President of the Board of Directors and a group of dedicated senior citizens. Meetings were held at the VFW Hall weekly and dinners were only served on special holidays. They had 69 members at the time. In 1980 Rev. Frank Bauman and members of Redeemer Lutheran Church invited the Senior Friends to hold its meetings at the Church thus enabling expanded programming for seniors. Membership had grown to 329 members and the church was getting too small for the growing group. In 1982 with the help of Lawyer Tom Kissel the group became incorporated and the non-profit corporation was formed.

At the time Gus Boll was on the Board of Directors and he made a statement that gave us the great center that we have today. “WHY DON’T WE BUILD OUR OWN CENTER?” word has it, Phil Hoffman got a big smile on his face and the project began.

They decided to contact about 25 local business men and hold a meeting. Actually, we call this a “Fund Raiser” and funds were raised that night. First off, it was explained that any monies given could be used as a tax write-off. That helped! Phil Hoffmann stood up and pledged $25,000. Not to be undone, many others did the same and before the night was out, the Seniors had over $400,000 in pledges. This grew to over $600,000 with $80,000 from the Seniors themselves. Pledges were limited to no more than 3 years. Not one person failed to pay their pledge.

Gus and his cohorts set out searching for property or a building for the future Senior Center. They settled on the old Sentry Store on South side of Hartford. They thought they had a done deal, only to find out it had not worked out. They were back to square one, when John and Laurie Novak stepped up to the plate and donated the property where the Senior Center is now located. Now we get to see John at work from our Schaefer Room, while he is working on the farm. We are so grateful to both John and Laurie. Martin Bakke served as president of the board for 10 years until his death in November of 1987. He was instrumental in getting many donations to help with the building of the new Senior Friends building but he died before its completion.

Now they were moving. The seniors went out and checked on some other buildings that they liked and decided that they wanted it to resemble the Town Hall in many ways. They hired an architect and the project was started.

Our Center is very unique, in that it has a bar. (Most centers do not) This was donated to the Center by Phil Hoffman, another great vision on his part. We now hold many functions at the center where the bar comes in handy. Plus on any given Tuesday, you will find some of the seniors enjoying a cocktail or two.

The Great Day finally arrived on Feb 14. 1995, located at 730 Highland Ave. The Vision was broadened just five years later with an addition to the building known as the John Schaefer Room, which was built using funds donated by John Schaefer. It, as well as the main room of the Center, is filled with Seniors on any given Tuesday. 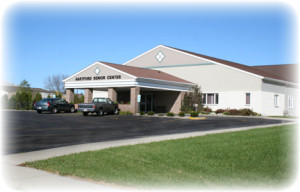 The Center could not have become a reality without the help of so many people like Bill Ripp, Jim Core, Bill Gee and Jerray Elsinger who played huge parts in getting the city of Hartford’s help by installing utilities, streets, curbs & gutters. Also, in the beginning and as [now], our Center has so many generous people that keep it up and running. They do this by donations and they do this by volunteering their time and talent to the Center. It is truly a Center owned and run by all of the now over 400 members who know what it is like to share in the original vision by Gus, Phil and John.